Home › Chronicle of events › June 25, 2021 Solemn event dedicated to the 100th anniversary of the economic service of Belarus 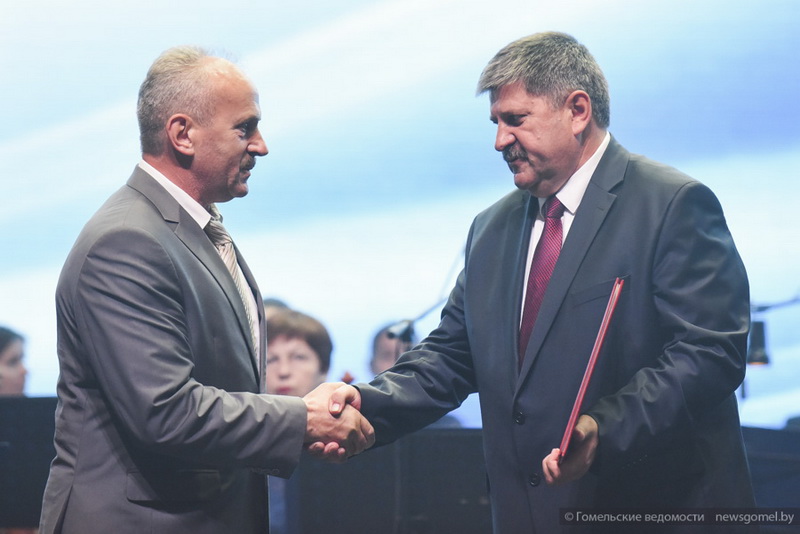 The Gomel region is a strategically important region that implements key industrial, infrastructure and socially significant projects for the whole country.

The Gomel Regional Union of Employers currently includes 65 (sixty-five) enterprises and organizations, of which 54 are industrial.

This is 25 percent of the total number of industrial enterprises in the region.

The total number of employees at these enterprises is about 80,000 (eighty thousand) people, or more than 50% of those employed in industry.

The first twenty gross-forming enterprises of the region include 18 (eighteen) members of the Union of Employers. These enterprises produce about 80 percent of the region’s industrial products.

Despite all the difficulties and existing challenges, thanks to the skillful leadership of the director’s corps, the knowledge and professionalism of labor collectives, stability is achieved in enterprises, and social partnership is developing.

As the Chairman of the Gomel Regional Executive Committee Gennady Mikhailovich Solovey said at the solemn event “Not only the level of development of our region, its competitiveness and investment attractiveness, but also the main thing depends on the effective and coherent work of the economic bloc, the well-being and confident future of each of our residents.”

The Gomel regional executive committee’s gratitude was presented to the chairman of the GOSN, director of OJSC “Gomel chemical plant” D.V. Chernyakov.

The gratitude “For significant personal contribution to the development and improvement of the social partnership system and active support of the activities of the Gomel Regional Union of Employers” was announced to 5 heads of enterprises:

A letter of gratitude from GOSN “For a significant contribution to the economy of the Gomel region, development and support of social partnership” was received by the labor collectives of OJSC «Gomselmash», OJSC «Gomelstroymaterialy», OJSC «Gomelsteklo», OJSC «Rechitsa hardware plant», «OJSC Zhitkovichi engine building plant».

We congratulate the veterans and workers of the economic services of the Gomel region on the holiday, and the heads of enterprises and labor collectives – with the awards!

Based on materials from GOSN